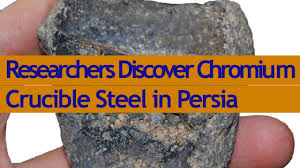 One manuscript in particular grabbed their attention. Titled al-Jamahir fi Marifah al-Jawahir, which translates to "A Compendium to Know the Gems", the manuscript was written in the 10th or 11th century CE by the polymath Abu-Rayhan Biruni. Crucially, it contained the only known recipe for forging steel in high-temperature crucibles. The problem is, it can be difficult to follow a thousand-year-old recipe.

"The process of identification can be quite long and complicated and this is for several reasons," says Marcos Martinon-Torres, last author of the study. "Firstly, the language and the terms used to record technological processes or materials may not be used anymore, or their meaning and attribution may be different from those used in the modern science.