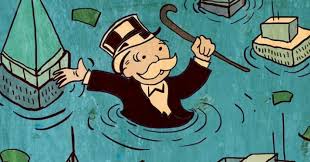 As poor as Laredo was, it didn't come close to matching economic conditions in Nuevo Laredo, which was just across the Rio Grande, which constitutes the U.S.-Mexico border in Texas. The first time that I went into Nuevo Laredo as a child, I was absolutely shocked at the level of poverty on that side of the river.

Doctors' offices in Laredo were regularly filled with people, some of whom were from Nuevo Laredo. Laredo doctors knew that many of their patients were unable to pay them. Nonetheless, I never heard of one instance where any doctor turned a patient away for inability to pay. They helped poor people with free medical treatment, on a purely voluntary basis.

Why did the doctors provide free medical care to the poor? Because they wanted to. Because they thought it was their ethical and moral duty to do so. They had chosen a profession whose aim is to heal people. They were not about to let a person's poverty interfere with fulfilling that aim.

Even though they were treating lots of people for free, Laredo doctors were still among the wealthiest people in town, second only to people on whose land oil had been discovered. Moreover, since America's welfare-warfare state way of life was still in its early stages, income taxes were relatively low, enabling doctors to keep a large portion of their income from those who were paying for their services. Doctors were doing well financially and were choosing to "give back" to the community by helping the poor with free medical services.