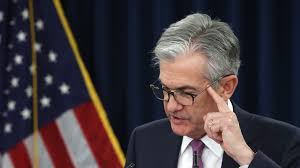 --means that - according to the latest FOMC projections - the Fed expects rates to be at zero at least until 2023.

There is just one problem (well technically two): for the Fed's AIT scheme to work, inflation will have to be low enough to where even if it rises above the 2% long-term target, the overshoot will be manageable and won't take place for a while. However, it now appears that even official readings of both goods and wage inflation, are starting to creep up substantially and could jeopardize the Fed's inflation overshoot target as soon as 2021.

First, a brief refresher on what the Fed has said regarding AIT - here, as Nordea's Andreas Steno Larsen writes, there has been a purposeful lack of clarity from Jay Powell although less profiled members of the FOMC committee have been much clearer in their communication: for example Robert Kaplan has saide he could support a hike "if inflation hits 2.275-2.350%", while uber-dorve Kashkari has suggested that interest rates are kept at current levels until inflation "breaks above 2% in 12 consecutive months." Most notably, perhaps, Chicago Fed's Evans - also a dove - hinted last week that a rate hike could potentially come into play before 2% is breached, if the Fed was comfortable enough with the inflation outlook.