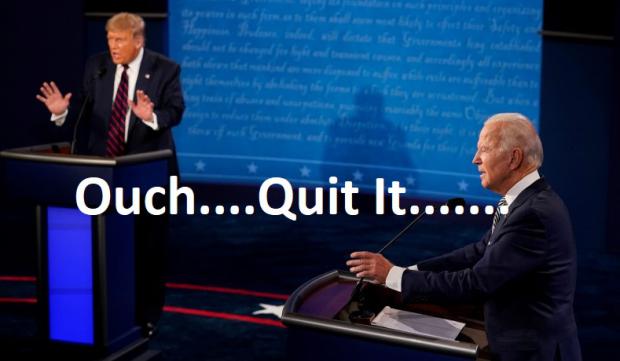 Authored by Andrea Widburg via AmericanThinker.com,

The short version of the debate is that Biden did well if one ignored that almost every other statement he made was a lie or fantasy; Trump dominated him, almost too aggressively; and Chris Wallace may have been the worst and most obviously biased moderator since Candy Crowley. Most significantly, though, Biden and Trump each made a critical point. Biden's was a tacit admission that, if he is elected president, he will preside over the end of the filibuster, allowing Democrats to pack the courts and add two new Democrat-majority states. Trump's point was that he's holding damning evidence about the Democrats' coup attempt.

Let's begin with Biden, whose squirming on court-packing and the filibuster promises the end of the American experiment. Chris Wallace, in one of the few tough questions he posed to Biden, said this:

So my question to you is, you have refused in the past to talk about it, are you willing to tell the American tonight whether or not you will support either ending the filibuster or packing the court?

Biden refused to answer, something the Trump quickly challenged. Here's the colloquy:

BIDEN: Whatever position I take on that, that'll become the issue. The issue is the American people should speak. You should go out and vote. You're voting now. Vote and let your Senators know strongly how you feel.

TRUMP: Are you going to pack the court?

TRUMP: Are you going to pack the court?

BIDEN: Make sure you, in fact, let people know, your Senators.

TRUMP: He doesn't want to answer the question.

BIDEN: I'm not going to answer the question.

TRUMP: Why wouldn't you answer that question? You want to put a lot of new Supreme Court Justices. Radical left.

BIDEN: Will you shut up, man?

BIDEN: This is so un-Presidential.

TRUMP: He's going to pack the court. He is not going to give a list.