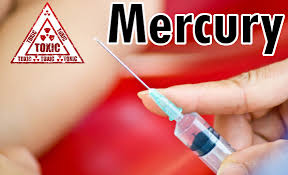 Mercury is one of the most highly toxic, nonradioactive elements. The three primary forms of mercury are elemental mercury (Hg0), inorganic mercury (Hg2+) and organic mercury compounds (MeHg and EtHg), all of which are deleterious to humans and other lifeforms. Mercury forms various compounds, well known for their toxicity in humans and environmental ecosystems. Health concerns exist regarding bioaccumulation of mercury in humans as well as in other living beings.

In addition to sources of mercury from contaminated seafood, humans are potentially exposed to mercury from such sources as dental amalgams and vaccines. Amalgams, commonly referred to as "silver fillings," continue to be used in dentistry to fill cavities from tooth decay. Amalgams are alloys of liquid mercury mixed with powdered metals consisting of tin, copper and silver.

Mercury crosses the placenta and is considerably more toxic to the fetal brain at much smaller concentrations that are toxic to adults. Babies exposed in utero and developing children are the most vulnerable and most severely harmed, when exposed to mercury, suffering from possible long-term cognitive impairment, physical maladies and developmental delays. These symptoms can include cognitive impairment, tremors, ataxia (loss of coordination and muscle movement), hearing loss, pneumonitis, paralysis, suppressed immunity, renal damage and other systemic/severe symptoms, including death at lethal doses.