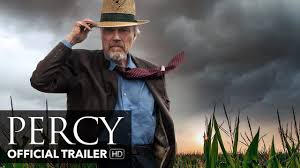 The movie hits theaters Oct. 9 and is based on the true story of a legal battle between the agribusiness giant and an independent Canadian canola farmer, Percy Schmeiser.

Schmeiser's real life tale begins in 1996, a significant year for the history of genetically modified (GM) crops. It's the year Canada became one of the first six countries to introduce GM seeds commercially, including seeds Monsanto engineered to tolerate its herbicide, Roundup.

That year, Schmeiser found Monsanto's GM canola seeds on his farm and saved some of them to plant the next year. Schmeiser had been saving seeds for decades, to plant the following season.

Schmeiser was a self-proclaimed "seed-saver." He had been developing his own disease-resistant seeds for nearly 50 years. His technique of saving seeds and his pride in his work were the things that defined him.

So, when Monsanto sued him for patent infringement in 1998, it came as a complete surprise. He then found out that one of Monsanto's private investigators had taken canola samples from a road alongside one of his fields and found Monsanto's patented genetic material.