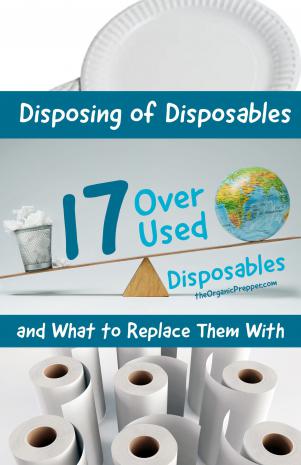 Being preppers for years we realized the importance of washable, reusable versions of everyday disposable products. For us, adopting this mindset was effortless. But, making this change also brought awareness to how many disposable "necessities" were entirely unheard of a hundred years ago. Many people out there will have a hard time making the transition from disposable to reusable. When you do though, you will be glad you did. Not only will you save money, but you will be helping the environment.

Here we offer you a few suggestions on how to get started and what to replace those disposables with.

We live in a nation of disposables.

America, which has a legacy of frugality and thrift, also has a legacy of innovation and efficiency. Additionally, we like our comforts. What is now considered "necessities" (carpeting? closets full of clothes? refrigerators?) were luxuries earlier than the 1940s or so.

But in the wake of World War II, manufacturing ramped up hand-in-glove with advertising and disposable income. "Better living through chemistry" became a buzz phrase. The old-fashioned methods of doing things gave way to the convenience of home appliances, pre-packaged or instant foods, chemical cleaners, and early electronics such as television, transistor radios, and (room-sized) computers.

Suburbs, which supplied housing for millions of young families in the post-war years, became places of relative affluence and jostling for status (i.e., "keeping up with the Jones"). As disposable income became more prevalent, manufacturers and advertisers saw a market for novelties such as paper plates or paper towels or disposable diapers and set about convincing people that these items were sanitary, efficient, and healthy. Eventually, these luxuries became "necessities," and the use of reusables began to diminish.

It got to the point where people shunned reusables. Those who continued to use handkerchiefs, cloth diapers, washable feminine hygiene, or even home-canned food were considered hopelessly out-of-touch and old-fashioned. Only a few stubborn holdouts believed they were saving money by sticking with the old-fashioned way of doing things.