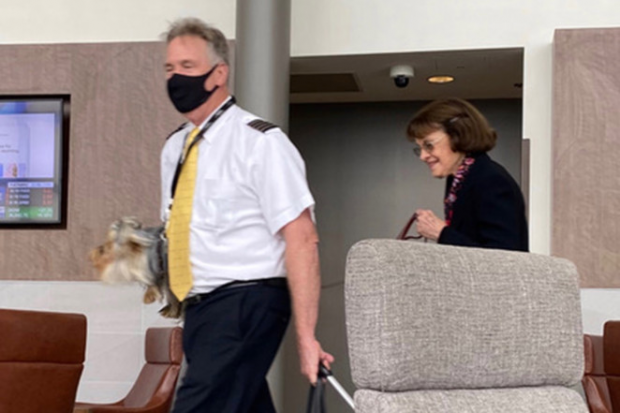 (Natural News) Sen. Dianne Feinstein was photographed in an airport without a mask just months after she called for a nationwide mandatory mask policy for airport passengers.

Fox News host Tucker Carlson unveiled the photos of the California Democrat, which he said were sourced from a private airport terminal at Dulles International Airport, during his show on Monday. During the segment, Carlson touched on the fact that Feinstein has publicly advocated for an airport mask mandate.

"In the photographs, Feinstein can be seen smiling without a mask on. One might even say she's sowing confusion about whether or not masks are necessary," Carlson mused. "A pilot with a mask is walking in front of her carrying a bag and a dog." Carlson said the photos were from a private terminal at Dulles airport on Friday.

In late June, the California senator issued a press release detailing how she sent a letter to the Federal Aviation Administration and Federal Transit Administration, calling for them to institute mandatory face-covering policies.

While some transit agencies and airlines have implemented mandatory mask guidance for the public, reports indicate that the patchwork of rules have only sowed confusion among passengers. Therefore, I ask that you issue clear, nationwide, mandatory mask requirements for all aviation employees and travelers," Feinstein said in the letter.

The Washington Examiner reached out to Feinstein's office for comment but did not immediately receive a response.