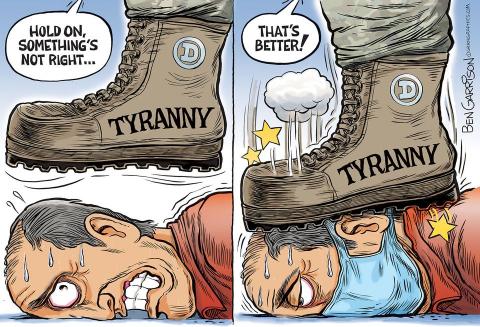 In the business of illegitimate lockdowns, Democrats and pretend Democrats, like Arizona Governor Doug Ducey, have imposed pandemic exceptions to the Constitution. They are unconstitutional and illegal. However, as  our imprisonment is expanding, with no end in sight, the business community is now partaking in the abuse of some members of the community and are doing the job that was previously only reserved for tyrannical government. In America, group think carries the day and the people, especially unhealthy people with serious medical conditions are paying the price for the total disregard for our Constitution.

There are two examples, both in Arizona, that are going to be presented which represents the new threat to individual liberty. Government has been successful in getting business owners to be new class of Brown Shirts in America.

At the Planet Fitness in Kingman, AZ., unhealthy people are forced to wear face masks in order to exercise and this is contraindictated by the Governnor's own exemptions to the face mask mandate and is contraindicated by OSHA for exercising people regardless of health. Surely a call to the proprietors would bring some common sense to the situation, but our calls to Planet Fitness, or as they call this franchise in Kingman, AZ., PLANET UNFITNESS, have gone unanswered.

As stated, the major point of concern is the face mask policy of the franchise in which they are requiring their customers, who are trying to achieve optimal health,to forcibly engage in a  potentially lethal activity entailing the wearing of CO2 supressing face mask while exercising on aerobic and and anerobic equipment.

Normal CO2 functioning for a human being is 21% with regard to CO2 with regard to OSHA. A group of people went to Kingman's Planet Fitness  and did a CO@ test while exercising. Here is the OSHA data prior to presenting the results of the test.

The following is from OSHA:

At levels 17 percent or below, your mental abilities become impaired. In a sealed environment, as oxygen levels drop from 21% to 17%, the CO2 level will rise to 4%. This level of CO2 can result in symptoms like dizziness, asphyxiation, confusion, fatigue, vertigo, headaches, tinnitus, and even seizures.

Remember, these numbers of 17% were achieved by a totally fit person in only 2 minutes of excercise

If the exerciser, Bridget Langston, in the following video, who is excercising on a treadmill while wearing a face mask, kept exercising for another 2 minutes, the following would have happened:

Here us a short video of the co2 test performed in Planet Fitness in Kingman, AZ.