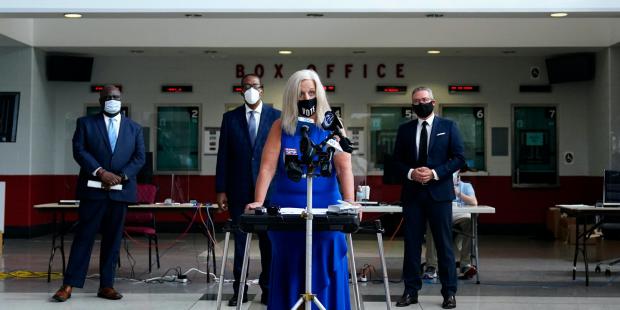 THE MORNING AFTER President Donald Trump called for his supporters to "carefully watch" voting sites, his presidential campaign requested that Philadelphia immediately allow them to appoint poll watchers at early-voting centers.

Early voting in Philadelphia began on Tuesday. The city opened six early-voting sites at new satellite election offices and another at City Hall where voters can register, request, fill out, and submit mail-in ballots. Unlike early-voting centers, traditional polling locations are only open on Election Day, and people can vote in person as opposed to delivering their mail ballots.

The tactic of raising doubts about the integrity of the mail-in voting process is an effort to dissuade Democrats from using it, said Lt. Gov. John Fetterman. Absentee ballots, available to every Pennsylvania voter, can either be dropped off in person at election locations or set through the mail. But if a voter who requested an absentee ballot — more than 2 million have already done so, the overwhelming majority Democrats — decides instead they want to vote in person on Election Day, he warned, they'll be turned away if they don't bring their ballot — and the envelope it came in — with them to the polls. "That's what they want," he told The Intercept. "Let's say half a million people out of 2 million say, 'Oh my God, I don't want to vote by mail anymore.' Can you imagine that?" The simplest thing, he said, is to just follow the instructions on the ballot and vote by mail.

On Wednesday, at the weekly Philadelphia City Commissioners meeting, which is open for public comment, the Trump campaign's Pennsylvania state director for Election Day operations, James Fitzpatrick, requested that the board allow the campaign to immediately appoint poll watchers at early-voting centers.