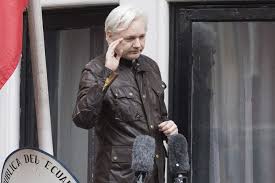 Plans to poison or kidnap Assange from the Ecuadorian embassy were discussed between sources in US intelligence and a private security firm that spied extensively on the WikiLeaks co-founder, a court has been told, reports the Guardian. The plan to poison Assange was to sicken him so bad that he would have to leave the embassy and seek hospital treatment.

Details of the alleged spying operation against Assange and anyone who visited him at the embassy were laid out on Wednesday at his extradition case, in evidence by a former employee of a Spanish security company, UC Global.

Microphones were concealed to monitor Assange's meetings with lawyers, his fingerprint was obtained from a glass and there was even a plot to obtain a nappy from a baby who had been brought on regular visits to the embassy, according to the witness, whose evidence took the form of a written statement.

One of the witnesses said that UC Global started off with small contracts that had been signed in October 2015 with the government of Ecuador in order to provide security for the daughters of the country's president and its embassy in London.