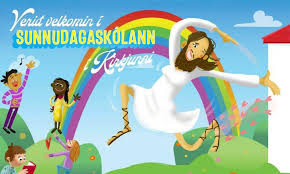 Vala Hafstað | Iceland Monitor – An advertisement from the National Church of Iceland, encouraging children to attend Sunday school, caused quite a controversy over the weekend. It depicts a big-breasted, bearded Jesus, wearing a white dress and makeup, cheerfully dancing under a rainbow.

The ad had been posted on the church's website and Facebook page but was removed Saturday. The cheerful Jesus will continue to adorn Reykjavík buses, though, for at least two more weeks.

Pétur Georg Markan, media representative for the church, recently told mbl.is that the church believes it is positive and natural for Jesus to appear to people in all possible forms. In that way, the church celebrates diversity.

I suppose these clowns don't know what the Bible says.

Hebrews 13:8 "Jesus Christ the same yesterday, and today, and forever."

I had thought that Iceland was reasonably a good place. And it might be. If the National Church is in agreement with blaspheming God - so that they do not get rid of their leaders who blaspheme God - they will fail, ultimately. And if the people don't stand up for what is right, the whole country will fail, ultimately.