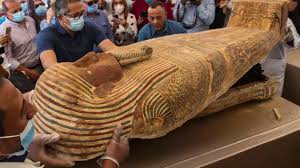 Opening one of the ornately decorated sarcophagi before assembled media, the team revealed mummified remains wrapped in burial cloth that bore hieroglyphic inscriptions in bright colours.

The dramatic find was unearthed south of Cairo in the sprawling burial ground of Saqqara, the necropolis of the ancient Egyptian capital of Memphis, a UNESCO World Heritage site.

"We are very happy about this discovery," said Mostafa Waziri, secretary general of the Supreme Council of Antiquities.

Since the find of the first 13 coffins was announced almost three weeks ago, more have been discovered in shafts at depths of up to 12 metres (40 feet).

An unknown number of additional coffins may still lie buried there, the tourism and antiquities minister, Khaled al-Anani, said at the site, near the 4,700-year-old pyramid of Djoser.