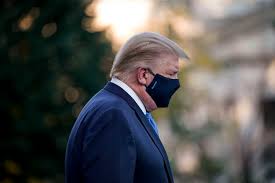 In the clip above, Don Jr. doesn't seem to want to take the curious timing of the president's infection with COVID-19 in the direction that Tucker was hinting at but the infection comes about at a very interesting point on the election timeline.

And it should be noted the timing of the outbreak is in sync with the announcement of President Trump's Supreme Court nominee Amy Coney Barrett. Thus it is really a two-bagger play against the Trump administration by nature (or otherwise) as the timing of hearings and a vote on Barrett before the election now appears up in the air.

Given the visceral hatred that the establishment has for Trump, nothing should be ruled in or ruled out.

A top libertarian emails me and wonders out loud:

Will they allow his children to be around him...or will "Covid protocols" leave him alone with people who may be compromised?...It sounds totally crazy until you stop for a second and think about what a totally crazy year it's been and also how totally crazy and ruthless are the people who want to be rid of him.