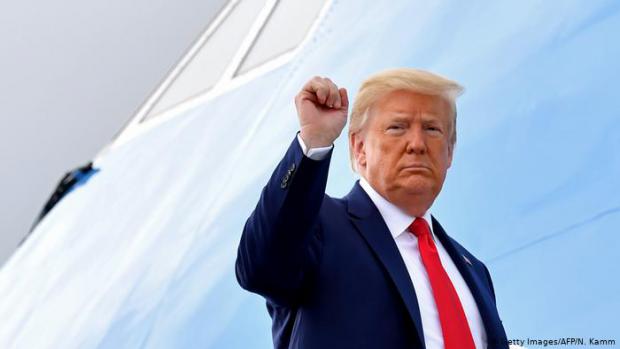 President Donald Trump vowed that he was starting to feel better but that the next two days are critical as he delivered an update on his coronavirus diagnosis from Walter Reed military hospital on Saturday night.

'I'm starting to feel good' the president said in a video posted to Twitter as he promised that he was fighting the virus for COVID-19 patients 'all over the world'.

Trump, 74, added that the treatments he is receiving are 'miracles from God' as he said that First Lady Melania Trump's symptoms were not as severe as his own.

'Melania is really handling it very nicely. As you've probably read, she's slightly younger than me, just a little tiny bit,' he said of his 50-year-old wife.

'And therefore, we know the disease, we know the situation with age versus younger people and Melania is handling it statistically like it's supposed to be handled and that makes me very happy, and it makes the country very happy, but I'm also doing well and I think we're gonna have a very good result again.'

The president on Sunday morning thanked his supporters on Twitter, retweeting a video shareed by White House's Director of Social Media Dan Scavino outside the Walter Reed Medical Center on Saturday night.

Trump tweeted at around 8am EST: 'Thank you so much!' Scavino had said: 'THANK YOU to all of the Great American Patriots who have come out tonight, in support of @realDonaldTrump at Walter Reed Medical Center. We'll all get through this, TOGETHER! #MAGAFlag.'

The president is said have been upset over the confusion surrounding his condition Saturday after his doctors had said he is doing 'very well' while White House Chief of Staff Mark Meadows claimed his vitals are 'very concerning'. Trump was particularly critical of the 'concerning' comment , CNN reports.