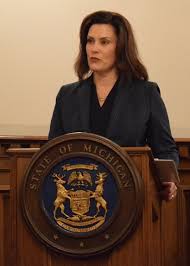 Now, Whitmer is having her broad interpretation of state executive authority checked by the Michigan Supreme Court, which found that she violated the Constitution with her extension of the state of emergency.

As a reminder, Andrea Widburg writes that Whitmer's "Stay Home, Stay Safe Executive Order" went into effect at the end of March, while people were still talking about a short-term exercise in "flattening the curve."

Whitmer quarantined everyone, locking people in their homes except for allowing them to go to major chain stores or work for (and still get paid by) the government.

As time passed, Whitmer's orders got more detailed, with carve-outs for activities that raised taxes or advanced social policies.  Thus, the lockdowns did not stop alcohol, pot, and lottery tickets purchases, as well as abortions.  She also issued orders affecting harmless or constitutionally protected behavior, such as banning travel to vacation homes, forcing stores to close whole sections, banning store advertising and hydroxychloroquine, and forbidding jet skiing and outdoor gardening.

Her decisions were devastating to people whose lives depended on these activities or businesses.  Her most vicious act was to wage a brutal war against a 77-year-old barber who had to choose between ignoring her ban against personal grooming services and starving.  It took two months before a judge finally set the matter to rest by ruling in favor of the barbershop.