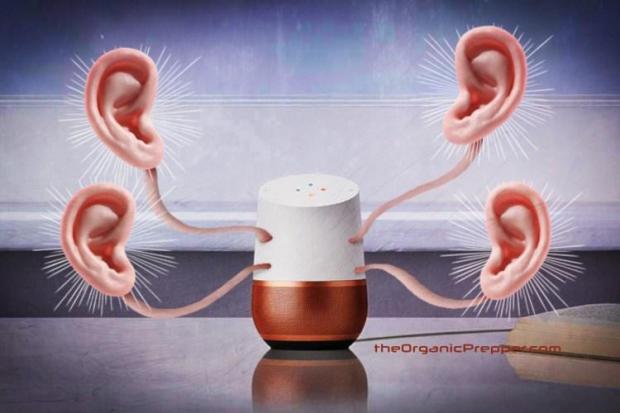 Remember all those conspiracy theorists and Luddites who told you they didn't want Echo or Alexa devices in their home because those gadgets were spying on them? Well, they were right. That's not even up for debate.

If you were one of those friends who mocked them and called them crazy, you were wrong. Just admit it.

If you are bewildered by what you just read, please, read on.

Nearly ten years ago, writers like Brandon Turbeville and others were warning that "smart technology" and the "internet of things" were being developed for surveillance and manipulation purposes. (Despite the companies' claims of greater convenience.) We've been in a virtual dragnet for years.

Those devices and technologies are ubiquitous and are being used to soak up data, private and personal conversations, interactions, and even movement. All of this openly discussed in mainstream outlets. Lately, this website has reported on the Nest, your phone's location tracker, and other "smart" technology. We've even talked about how we all have "surveillance scores."

Take a look at WIRED's article by Sidney Fussell, "Meet the Star Witness: Your Smart Speaker." In this article, Fussell details a murder case in which an Amazon Echo device was presented as evidence.

In July 2019, police rushed to the home of 32-year-old Silvia Galva. Galva's friend, also in the home, called 911, claiming she overheard a violent argument between Galva and her boyfriend, 43-year-old Adam Crespo. The two lived together in Hallandale Beach, Florida, about 20 miles from Miami.

When officers arrived, Galva was dead, impaled through her chest by the 12-inch blade at the sharp end of a bedpost. Police believe Crespo tried to drag Galva from their bed. She held onto the bedpost to resist, but the sharp end snapped, somehow killing her. Police charged Crespo with second-degree murder. He pleaded not guilty and was released on $65,000 bail, awaiting trial. In the months since the arrest, Crespo's lawyer has presented a surprising piece of evidence in his defense: recordings from a pair of Amazon Echo speakers.

"I had a lot of interviews where people said, 'Oh, are you aware that this could be the first time Alexa recordings are going to be used to convict somebody of murder?'" says Christopher O'Toole, Crespo's lawyer. "And I actually thought of it the opposite way, that this could be the first time an Amazon Alexa recording is used to exonerate somebody and show that they're innocent."

When police and prosecutors collect smart home or speaker data, it's typically used as evidence against suspects. The Hallandale Beach Police Department filed a subpoena for Crespo's speakers, as they may have picked up audio of the argument Galva's friend overheard.

The incident shows the growing role of smart home devices and wearables in police investigations.

In 2016, police in Bentonville, Arkansas, requested Amazon Echo data in connection with a man's death, believed to be the first such request. Amazon initially tried to block the request, but later handed over the data. A murder charge against the defendant was later dropped, but the speaker, smart home, and wearable data has figured into multiple cases since then.