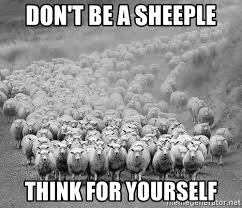 Masks are an obvious mind control device, and I am disturbed so many people are complying on a global scale.

Through the years when I've seen images of people in China wearing masks that control the air they breathe "due to pollution". I knew it was as much of a population control mechanism of depersonalization as are burkas.

Masks depersonalize while making a person feel as though they have no voice. It is a barrier to others.

In MK Ultra Project Monarch mind control, Michael Jackson had to wear a mask to silence his voice so he could not reach out for help.

Remember how he developed that whisper voice when he wasn't singing? Masks control the mind from the outside in, like the redefining of words is doing. By controlling what we can and cannot say for fear of being labeled racist or beaten, for example, it ultimately controls thought that drives our words and ultimately actions (or lack thereof).

Likewise, a mask muffles our speech so that we are not heard, which controls voice…words…mind.

This is Mind Control.

People who would never choose to comply but are forced to wear a mask in order to keep their job, and ultimately their family fed, are compromised. They often feel shame and are subdued. People have stopped talking with each other while media controls the narrative.