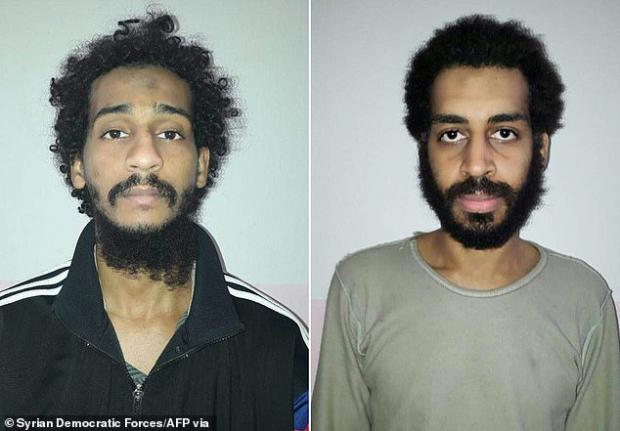 Two terror suspects known as one half of the 'ISIS Beatles' appeared on U.S. soil for the first time on Wednesday, after having been flown from Iraq to stand trial in Virginia.

Alexanda Kotey, 36, and El Shafee Elsheikh, 32, made their first federal court appearance this afternoon, appearing via videolink in Alexandria at 5pm.

The pair were indicted on eight charges, including conspiracy to murder and hostage-taking resulting in death, in connection with the killing of four US hostages in Syria and Iraq.

Elsheikh, wearing a surgical mask, asked whether he was under arrest and was informed by Magistrate Judge Theresa C. Buchanan that he was.

When asked if he wanted to hire his own lawyer or have one appointed, he said: 'I don't know. I haven't had time to consult.'

Both were assigned court-appointed lawyers.

They did not enter pleas, and will next appear in court on Friday for a detention hearing and their arraignment.

Zachary Terwilliger, the U.S. Attorney for the Eastern District of Virginia, spoke briefly outside court after the hearing.

He said they had made their initial appearances, and were 'appraised of the charges against them'.