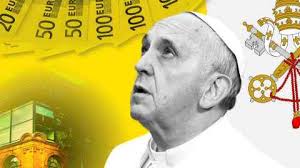 A couple of weeks after Cardinal Angelo Becciu, second-in-command of the Vatican's powerful Secretariat of State, resigned amid burgeoning financial scandals, another scandal has emerged, this time it involves the Vatican using some donation money, intended to help the working poor, to bet on the creditworthiness of now bankrupted US rental car company, Hertz.

FT broke the story on Thursday, citing documents, shows how the Vatican, under Becciu's management, used donation money to purchase structured notes linked with credit default swaps as part of a gambling bet Hertz wouldn't default by April 2020. Hertz filed for bankruptcy on May 22, due to the economic downturn spurred by the virus pandemic, which allowed the Vatican to "narrow escape on the investment, which paid out in full," FT said.

In 2018, the Pope, highly critical of global capitalism or mostly unfettered capitalism, warned about the dangers of the CDS market, and its role in the 2008 financial crisis. He specifically warned about the bundling and re-bundling of CDS products into structured debt.

"It is obvious that the uncertainty surrounding these products . . . makes them continuously less acceptable from the perspective of ethics respectful of the truth and the common good, because it transforms them into a ticking time bomb ready sooner or later to explode, poisoning the health of the markets," Pope Fancis said in a 2018 statement.