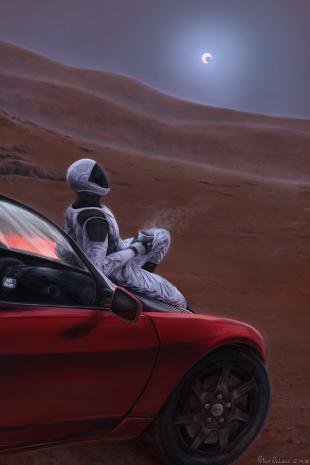 Starman just cruised by Mars for the first time.

The spacesuit-clad mannequin is "driving" SpaceX founder and CEO Elon Musk's Tesla Roadster, which launched in February 2018 on the debut flight of the company's powerful Falcon Heavy rocket. And the duo just hit a big milestone on their cosmic journey.

Starman and the Roadster circle the sun once every 557 Earth days, according to the tracking site whereisroadster.com. As of today, car and driver have covered nearly 1.3 billion miles (2.1 billion km) in space — far enough to drive all of the roads on Earth more than 57 times over, whereisroadster.com calculated.

And the duo will probably rack up a lot more space miles before they're done. The Roadster will eventually barrel into either Venus or Earth, likely within the next few tens of millions of years, a 2018 orbit-modeling study determined . But the chances of an Earth or Venus impact in the next million years are just 6% and 2.5%, respectively.