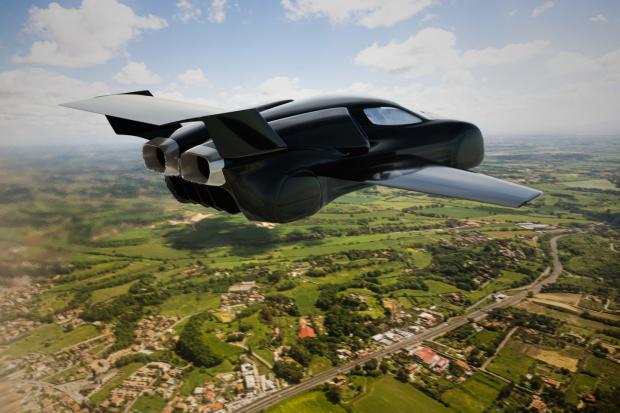 But some remain unconvinced, and Greg Brown is vehemently among them. eVTOLs, Brown reckons, will be little more than short-range, low-speed helicopter replacements in the near future.

Brown, who used to fly F-18 carrier jets in the US Navy and is now flying 777s for a major airline, has spent the last 15 years working on a true flying car design – a proper high-speed jet plane crossed with a crazy luxury hypercar.

Brown's dream is a vehicle that can draw more gawping attention at a car show or an air show than any single-mode vehicle. That can out-accelerate a Lamborghini on the road, then drive onto a runway, slide out a set of tucked-away wings, fire up a pair of roaring jet turbines and take to the air in a rush of speed unlike anything in the private jet market.

One that can cruise at more than 500 mph, perform cornering maneuvers at loadings up to 5G, do full barrel rolls and fly up to 850 miles without touching mandated fuel reserves. That can land without flaring, on extended shocks like the ones used in Baja and Trophy Trucks. That can do it with a genuine luxury approach to the interior instead of the utilitarian, metallic cockpits of the typical jet, and that can sell for hypercar money.

And things have come a ways since the GF7 design he showed us in 2014. For starters, the new Firenze Lanciare design looks a lot more like a hypercar than some weirdly folded aeroplane when it's in street mode. This is chiefly thanks to a new hideaway wing design Brown has been working on, as well as a chassis and suspension setup borrowed from extreme off-road racing events and the widespread availability of high-powered electric drivetrains.