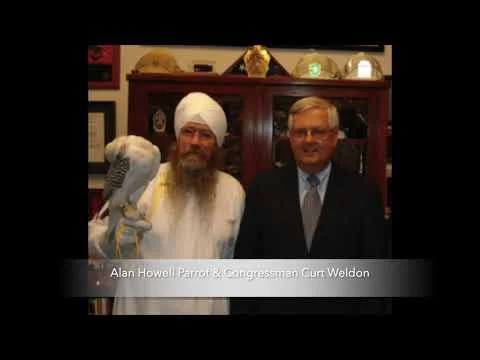 00:00: PARROT: "He (Governor Richardson) was all excited and he said "I can become", you know his Staff advisor (Mrs. Gay Dillingham) was saying "you can become the next President" if you get, if you help Alan bring bin Laden back.  Um, you know we discussed that we were going to give him a share of the Rewards for Justice money which is $50 million dollars, uh he was all excited but then he said, he said um, twice, he said "I cannot ask permission from Leon Panetta to work with you to get bin Laden out of Iran, but I can ask my good friend Leon Panetta if he has any objections".   And so he spoke to Leon Panetta on two occasions, we got it back in writing and verbally, that Leon Panetta told him, "focus on North Korea only", and in the second conversation he said "do not pursue bin Laden in Iran."

03:55: WELDON: "Ettinger is Biden's closest friend, he meets with Biden monthly, uh he was his first legislative director and he's an attorney.  More importantly, Brian is the unpaid Chairman of the organized, Interagency Organized Crime Task Force for the US, which he does for Biden which means he works with all of our agencies.  And Biden sends him on secret missions, the most recent of which was to Pakistan . . . uh . . . without the State Department involved.  Now you can't mention that while I have Brian on the phone but I'm telling you that to give you an idea of who he is."

04:44: PARROT: "And also Sir, privately between us . . . uh, if we can work out a cooperative agreement I will share a significant percentage of the (UBL/Zawahiri) Rewards for Justice . . . "

04:53: WELDON: "You've always said that, uh.  And you know Alan, let me say this.  You told my daughter it was about money.  It's really never been about money.  You know, I had my daughter's house invaded by the FBI.  You've never had that done.  They did that to my daughter that you talked to two weeks before my election.  And they never talked to her.  And that intimidation and that threat.   I know they've talked to you, but you've never had that done publicly.  That was done to me."

05:37: PARROT: "I'm a big supporter of you Sir and I never wanted to offend anybody, and, and forgive me for calling your daughter."

05:43: WELDON: "No that's alright you talked to her but, you know you told her it was about money.  My daughter's house was raided by the FBI, because that's what it's about.  It's about me not wanting my family abused.  They never talked to her.  They raided her, they raided her to create an incident to get me out of office.  Probably partly because I was dealing with you, I don't know.  I know the CIA set me up because I know the names of the people in the agency from all their friends. So it's not (about money), I mean obviously I can't work for free, but it's more about my stability and my security and my family security."

00:08: WELDON: "I told you who Brian is.  He's a good friend and  trusted partner of mine.  He um, he has access . . . ah, he doesn't get paid, he's does this as a favor for Biden with the Interagency Organized Crime Task Force that works with our agencies.  He's also very close to Biden on a number of issues, he was his former Staffer.  I trust him with my life, and we're business partners.  I've told him about you . . . but I want you to tell him the most recent situation and then Brian and I are going to talk about it."

01:08: ETTINGER: "Curt told me about I guess the lates incident with, uh, with with uh Governor, Governor Richardson, and uh he gave he went through your background and who you are and the people that you previously contacted, and he indicated that you know, you were going to try to get Susan Collins and Lieberman aahm, united together to go in and see the Pres, to brief the President (Obama) or the Vice President (Biden) about this situation."

01:48: ETTINGER: "I'm sure you do know most of the royal, members of the royal families because that's what they hunt with is falcons, as well as Bin Laden, ahh, um, ahh, used to hunt with falcons . . . he still does."

02:17: PARROT: "Yes, falconry is the Rosetta Stone for al-Qaeda.  I met Victor Bout in Shaikh Zayed's falconry camps, and recently between November 2004 and up until recently my team members have met Usama bin Laden six times inside Iran.  We have repeatedly notified the US government and only received, uh first we were ignored, then we were obstructed, and then we were threatened."

02:48: ETTINGER: "Yeah, I mean that doesn't surprise me.  Ahh, ahh, there's a friend of mine who's an international hunter and he hunts with falcons with the royal family of the UAE and his name is ahh, Saeed ahh Khan Karacha?  And I don't know if you know Saeed but he takes them in the Himalayas ahh to go this mountain goat they go hunting with the royal family there, and he told me about a year ago that uhm because he has a house also in Quetta, he told me that uhm he knew recently that Bin Laden was in northern Iran and he's an American citizen and he told people at the Embassy and they, they ignored him like the plague."

03:33: WELDON: "Alan, I haven't told you this but on my most recent trip to Kuwait, uh, I was with my two closest friends there, Sheikh Mohammed who's the Foreign Minister, Deputy Prime Minister uhh, and former US Ambassador and Sheikh Saud who was the Ambassador during Desert Storm, and who was George Bush the father's closest friend in the Middle East.  He, he's a very close friend of mine, and we were having a private dinner with his son Noah who's another really close friend of mine, and ahh we got to talking about Bin Laden and I said Sheikh Saud, where do you think he is?  He said, "Oh Curt", he said, "there's no doubt, he's in Iran."

04:09: ETTINGER: "Yeah I just told Curt I said now, the b' the better way of doing it is if Susan Collins and Lieberman are on board, I wouldn't go see Obama I'd go see Biden."

04:25: PARROT: "Here's the problem Sir:  Ahh, we have identified with documentation, three mechanisms used by the Bush administration to covertly engineer Bin Laden's house arrest inside Iran, we have identified two mechanisms used by this administration ahh, to continue the legacy, and Hillary Clinton's fingerprints are all over this, and Leon Panetta's fingerprints are all over this.  We will have tremendous opposition."