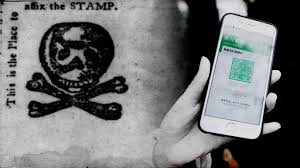 We the People will not be ruled over by modern digital kings, anymore than the colonists were willing to submit to a tax wherein they were not only burdened, and denied due representation… but under which every last aspect of their colonial lives would have been regulated and controlled.

It is no exaggeration to say that today — if something as odious as a "digital certificate" or any other forced-proof of compliance were instituted — that we would be facing something not only as bad as the 1765 Stamp Act, but magnitudes worse.

What has been suggested, and surely is being attempted, is nothing short of an 'authorization gate' to control and lock us out of our ordinary, physical 'base reality' lives.

But those aspects of life not only predate computers, the Internet and the men-who-would-be-kings, but they outweigh them. Our rights and freedoms are inherent — not granted by a piece of paper, and damn sure not to be given back to us by digital overlords with a penchant for power and absolute control.

GREEN SABBATH: Sunday Lockdowns for "Gaia" & Jubilee for the Earth