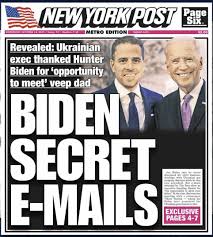 Everything the Democrats accused Trump of doing they were apparently doing themselves.

Hunter Biden introduced his father, then-Vice President Joe Biden, to a top executive at a Ukrainian energy firm less than a year before the elder Biden pressured government officials in Ukraine into firing a prosecutor who was investigating the company, according to emails obtained by The Post.

Donald Trump in the NY Post:  Vice President Biden, you owe the people of America an apology because it turns out you are a corrupt politician,"… "The Biden family treated the vice presidency as a for-profit corporation, flying around the globe, collecting millions of dollars from China and Ukraine and Russia and other countries."

Trump said the reporting indicates, however, that "Joe Biden has been blatantly lying about his involvement in his son's corrupt business dealings." "These emails show that Biden's repeated claim that he has never spoken to Hunter about his business dealings were a complete lie," Trump said. "He's trying to cover up a massive pay for play scandal at the heart of his vice presidency."

"Hunter was being paid for access to his vice-president father, who was specifically put in charge of Ukraine and Russia," Trump said. "It's a corrupt family. Joe Biden personifies the selfish and corrupt globalists who got rich and powerful at your expense."

Facebook jumped so fast, they were stopping it spreading before their own "fact-checkers" even come up with a reason:

Facebook has reduced the distribution of a New York Post story containing bombshell information indicating that — contrary to his previous denials — Joe Biden allegedly did meet with an adviser to the board of Burisma while he was vice president, arranged by his son Hunter, who was then working as a lobbyist for the company. Twitter followed suit soon after, labeling links to the story "unsafe."