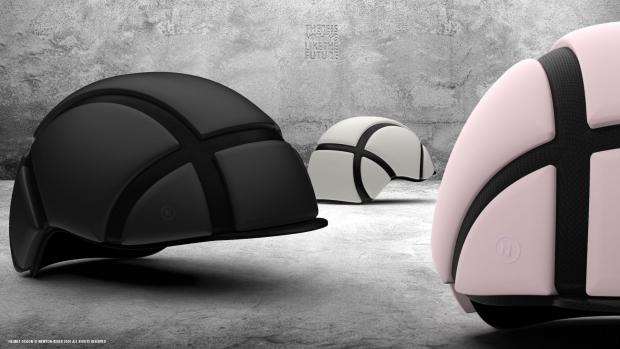 The Newton-Rider consists of a flexible, stretchable liner on the inside, joined to a series of pads on the outside. Those pads are composed of a proprietary blend of viscoelastic and non-Newtonian materials. "Viscoelastic" refers to substances that exhibit both viscous and elastic characteristics, while "non-Newtonian" refers to fluids that temporarily become more viscous (and thus harder) when subjected to stress.

As a result, the helmet is somewhat squishy and pliable during regular riding. And because there are spaces between the pads, the Newton-Rider as a whole is able to stretch and bend, to conform to the contours of the rider's head. It can also be folded up and stuffed in a bag.

What's more, the helmet is just 16 mm thick – by contrast, traditional polystyrene foam helmets have a thickness of about 30 to 35 mm. The final commercial version should weigh somewhere between 450 and 460 g (15.8 and 16.2 oz).

In the event of a crash, the Newton-Rider's pads are claimed to harden at the point of impact, absorbing much of the energy that would otherwise be delivered to the head. Because they subsequently soften back to their original state, though, the helmet can still be used again. By contrast, because the foam in traditional helmets irreparably breaks under stress, such helmets have to be discarded after each big impact.