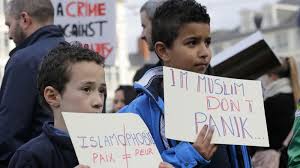 It's not enough that New York politicians had given Black Lives Matter protests a de facto dispensation from COVID-19 restrictions while limiting religious gatherings, prompting a June rebuke by a judge. Now it appears that while Governor Andrew Cuomo has just fined a number of synagogues $15,000 for violating his virus-oriented prohibitions, large Muslim gatherings are escaping mainstream media and politician scrutiny.

There was, for example, the Arbaeen procession earlier this month. This is a yearly fall event in which Shiite Muslims in Flushing, Queens, honor Mohammed's grandson, "whose death at the hands of a Sunni caliph marked the pivotal break between Shiites and Sunnis," informed FrontPage Mag's Daniel Greenfield Tuesday.

As Queens now has a sizable Muslim population, these processions have become regular occurrences — and Covidian paranoia hasn't changed that. Neither has Cuomo or Mayor Bill de Blasio. In fact, they behave as if they don't even notice the events.