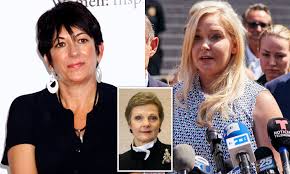 The 400-page plus document has been ordered to be unsealed by Thursday. It is expected to shine an unprecedented light on the murky world of Ghislaine Maxwell and Jeffrey Epstein.

Transcripts of interviews conducted with alleged sex trafficker Ghislaine Maxwell that referenced her former boyfriend, the dead pedophile Jeffrey Epstein, and contain intimate details about her sex life, should be made public no later than 9 a.m. ET Thursday, a New York judge ordered Tuesday.

The controversial transcripts, long sought-after by some of Epstein's victims and the media, are expected to shine an unprecedented light on Maxwell and Epstein's life together and come from two days of depositions in 2016 for a since-settled libel case filed against Maxwell by Epstein accuser Virginia Roberts Giuffre. Maxwell's legal team has argued the deposition contains "intimate" information about her sex life and other personal matters. Federal prosecutors say they believe Maxwell may have perjured herself during the testimony.

The transcripts run to more than 400 pages.

Tuesday's order by District Judge Loretta Preska marks what appears to be a final and resounding defeat to Maxwell's persistent attempts to keep the deposition secret.

On Monday, the Second U.S. Circuit Court of Appeals in Manhattan ruled that Preska properly decided that the public had a right to access documents from legal proceedings and that transcripts should be unsealed because arguments by Maxwell's lawyers were meritless.

Her lawyers have argued that the unsealing of the deposition could interfere with Maxwell getting a fair trial next year; Preska has firmly come down on the side of those seeking its unsealing.

Georgia Recount Uncovers 2,600 Uncounted Ballots in One County, Most for Trump