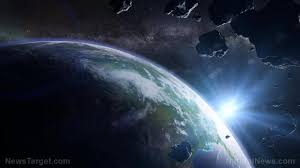 (Natural News) About a year ago, I gave a live presentation in Branson, Missouri, that is only now being made fully public. The presentation, shown below via Brighteon.com, reveals that the real master plan which led to COVID is actually an extermination plan for humanity.

Population reduction has been the goal all along. But where the globalists have shown their true evil genius is in their choice of creating a biological weapon with high transmission rather than high fatality rates. The virus was never very deadly to people under the age of 50, but it was always highly contagious to people of all ages. And that contagiousness, it turns out, was enough to advance their nefarious plan against humanity.

The rapid spread of the virus allowed the globalist-controlled media to claim "cases" were skyrocketing, thereby justifying weaponized lockdowns and a global rolling out of medical fascism disguised as "public health" policies. Based entirely on the speed of the spread of the virus, cities, states and nations of the world were able to achieve three key goals that represent the necessary precursors to global human extermination:

Crushing the existing human economies of the world, including food production, ultimately leading to mass famine, homelessness and total dependence on government.

Rolling out new, Orwellian medical fascism laws and edicts that set the precedent for mass arrests and forced relocation into "quarantine camps" for those who resist. These camps, of course, are actually death camps and processing facilities for eliminating human beings.

Forcing compliance with global vaccine mandates which will of course be used to achieve global infertility and accelerated deaths from diseases and subsequent infections. Whereas a pathogen could not achieve a 90% death rate on its own, the engineered pathogen (the Wuhan coronavirus) was able to be used to drive people into mass vaccine compliance, during which they can be directly injected with toxic substances, vaccine compliance tracking nanotech (quantum dots) and biology-altering mRNA sequences that literally hijack the body's cells and reprogram them to produce whatever protein sequences are engineered into the mRNA vaccines.

Thus, globalists have simultaneously built a global pandemic prison camp combined with a mandatory vaccine obedience system through which they can repeatedly spread more infectious disease and promote accelerated deaths or infertility.