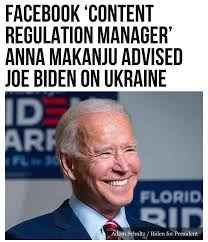 (Natural News) Although it wasn't very surprising that Facebook tried to stop the New York Post's story about the damning contents of Hunter Biden's laptop from circulating last week, it turns out that Joe Biden has a very well-placed connection at the social media giant who could well be operating on his behalf.

The Global Policy Manager for Content Regulation at Facebook, Anna Makanju, was a special policy adviser on Eurasia and Europe, including Ukraine, to the former Vice President. She currently serves as a legal expert in charge of ensuring election integrity on the platform and leads the department that decides which policies to adhere to while censoring election "misinformation."

It's hard to imagine how she could possibly be impartial in that role, and it could well be at least part of the reason that Facebook tried so hard to stop the New York Post story from getting out. Facebook openly admitted that it blocked the distribution of the explosive report, which discusses evidence that Joe Biden's son Hunter was part of a corruption scandal.

A 2015 email retrieved from the laptop that was featured in the article shows that an adviser to the Ukrainian energy firm Burisma thanked Hunter Biden for giving him a chance to meet the former vice president. Joe Biden has stated in the past that he has "never spoken to my son about his overseas business dealings" – something that has been exposed time and time again as an outright lie.