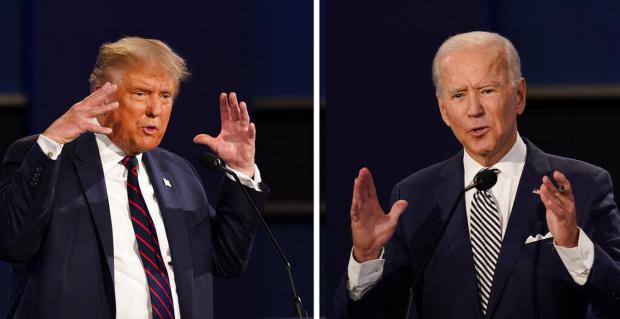 The first presidential debate went off the rails and the second debate was replaced by dueling town hall events after President Donald Trump, who tested positive for COVID-19, pulled out because he wanted to debate in person, not virtually. The final debate between Trump and Democratic presidential nominee Joe Biden is slated for Thursday, Oct. 22, at 9 p.m. ET (6 p.m. PT) at Belmont University in Nashville, Tennessee. The two candidates will appear on the same stage in person and socially distanced from each other and the moderator.

After constant interruptions plagued the first debate -- mostly Trump speaking over Biden -- a new rule has been implemented for the final debate. Each candidate's mic will be muted during the other's initial 2-minute response to each debate topic. During open discussion afterward, however, both mics will be live.

Otherwise the format will be similar to the first debate, which will run for 90 minutes with no commercial breaks. Kristen Welker, NBC News' White House correspondent, will act as moderator. Welker has announced six topics ahead of Thursday's debate:

How can I watch the debate on TV or online?

The debate will be shown live on every major network and cable news channel, including ABC, CBS, Fox, NBC, CNN, Fox News, MSNBC and C-SPAN. You'll also be able to stream the debate live on YouTube via CBS News and other services like C-SPAN. (Editors' note: CBS News is owned by ViacomCBS, which also publishes CNET.) The debate will also be streamed via Twitter's US Election hub in the Explore tab.

If you don't have a cable or satellite TV subscription, you can watch the debate with a live-TV streaming service. All of the services listed below carry the major networks and cable news channels. If you want to watch the debate on a particular local network, you can check whether each service carries it in your area with the links below.