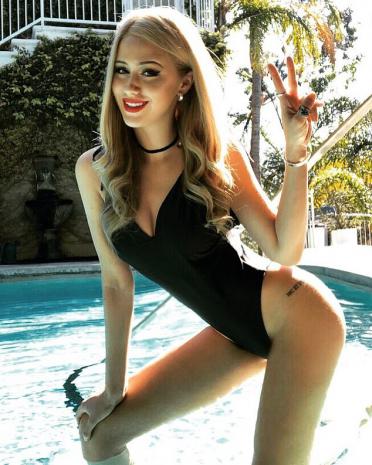 The actress who honey-trapped Donald Trump's lawyer Rudy Giuliani in the new Borat movie has been revealed to be a glamorous BLM-supporting 24-year-old from Bulgaria who was plucked from obscurity for the role.

Maria Bakalova, who graduated from film school last year, has skyrocketed into the presidential campaign after it was revealed last night she duped Donald Trump's lieutenant Giuliani by pretending to be a conservative reporter.

Following an interview on coronavirus, Bakalova led the 76-year-old statesman into a hotel room, where he reclined on a bed and appeared to put his hands down his pants, before he was interrupted by Sacha Baron Cohen's character.

'She's 15. She's too old for you,' Borat screams in the scene filmed in July, waving Giuliani off his 'daughter' Tutar.

Giuliani later pointed out, 'I was fully clothed at all times,' and told a reporter he was merely tucking in his shirt, not doing anything untoward.

'I lean back and I tuck my shirt in and at that point they have this picture that they take, which looks doctored by in any event,' the former mayor of New York told WABC radio Wednesday.