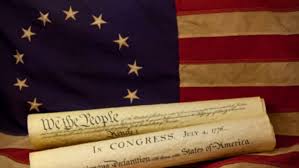 Jefferson borrowed freely from Locke, Rousseau, Hume to come up with an eminently quotable Greatest Hits, featuring "self-evident" truths such as "all men are created equal", "unalienable rights", and that searing "life, liberty and the pursuit of happiness."

Well, Baudrillard would have dubbed the exercise a mere simulacrum, because in real life none of this uplifting rhetoric applied to Native Americans and enslaved Africans.

Still, there's something endlessly fascinating about these "self-evident truths". They actually radiated like Spinoza axioms, spawning abstract truths that can be extrapolated at will. Jefferson's "self-evident truths" ended up creating the whole, massive structure of what we define as "Western liberal democracy".