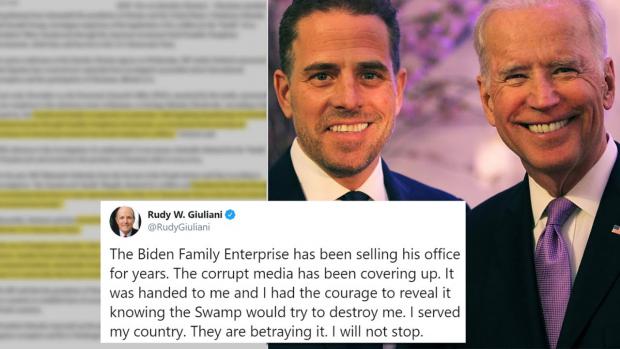 Authored by Tyler O'Neil via PJMedia.com,

News of the FBI investigation came days after Tony Bobulinski, a former business partner with Hunter Biden, spilled the beans on Joe Biden's involvement with his son's business deals in China, Ukraine, and elsewhere in an hour-long interview with Fox News' Tucker Carlson. Bobulinski first came forward before the final presidential debate, and a Senate committee has confirmed that his documents are genuine.

As Murtaugh noted in the call with the press, Bobulinski claimed he had met face-to-face with Joe Biden twice, and he presented evidence that the Biden family made a concerted effort to keep Joe Biden's involvement off the books and to ensure "plausible deniability."

The Biden campaign has not disputed the veracity of the emails or Bobulinski's claims that he met with Joe Biden face-to-face. Instead, they pushed the narrative that the entire scandal is "Russian disinformation" or a distraction from the real issues in the campaign.

Murtaugh noted that only The New York Times saw President Trump's tax returns before running the story and that many media outlets ran with the story despite not having seen the documents, yet most of the legacy media seems intent on entirely ignoring Bobulinski and the Biden corruption scandal.

Given this background, Murtaugh posted seven questions to Biden:

1. Were you aware that Hunter and his associates have been under FBI investigation since last year?

2. Did you meet with Tony Bobulinski?

3. Have you ever met with any of your son's business associates?

4. Are any of these emails not authentic?

5. Why did Rob Walker say Bobulinski could burn all of us?

6. Do you, Joe Biden, deny that you were making business decisions about this foreign business venture?

7. Were you, Joe Biden, in fact, a beneficiary… to receive a 10 percent stake in the deal [with a Chinese energy company]?