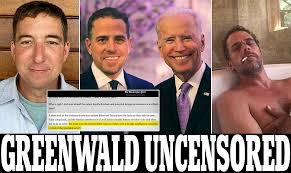 Journalist Glenn Greenwald has resigned from news outlet The Intercept which he co-founded after claiming he was being silenced over an article on Presidential candidate Joe Biden.

He says he was told his article would only be published if critical points against the Democratic candidate were removed and he says this forms part of a US media conspiracy of silence over Hunter Biden's laptops and the serious questions Joe still has to answer over his son's sketchy Chinese and Ukrainian business deals.

Because his article was censored, Greenwald published it in full on his website.

Publication by the New York Post two weeks ago of emails from Hunter Biden's laptop, relating to Vice President Joe Biden's work in Ukraine, and subsequent articles from other outlets concerning the Biden family's pursuit of business opportunities in China, provoked extraordinary efforts by a de facto union of media outlets, Silicon Valley giants and the intelligence community to suppress these stories.