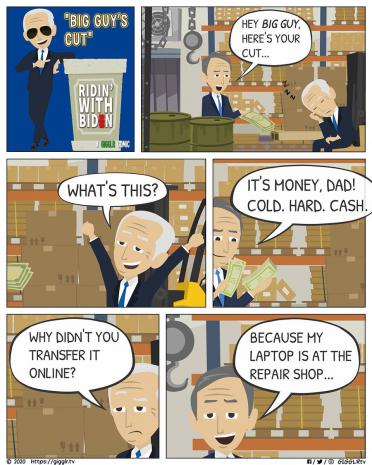 Tony Bobulinski reached his. And it has doomed the Democrats' chances in this election cycle regardless of what happens on Tuesday.

In his widely-censored interview with Tucker Carlson Bobulinski's 'disgust circuit' was on full display. I've talked about this in the past.

Normally the disgust circuit is triggered through the classic "Nuts and Sluts" shaming technique used on Republicans or anyone else the powers that be want removed from the public stage.

"Nuts and Sluts" is easy to understand. Simply accuse the person you want to destroy of being either crazy (the definition of which shifts with whatever is the political trigger issue of the day) or a sexual deviant.

This technique works because it triggers most people's Disgust Circuit, a term created by Mark Schaller as part of what he calls the Behavioral Immune System and popularized by Johnathan Haidt.

The disgust circuit is also easy to understand.

It is the limit at which behavior in others triggers our gut-level outrage and we recoil with disgust.

The reason "Nuts and Sluts" works so well on conservative candidates and voters is because, on average, conservatives have a much stronger disgust circuit than liberals and/or libertarians.

It was clear as day for anyone watching. Bobulinski didn't try to hide it.

And that was quite enough of that.

That's where his deadline to the Bidens and Schiff came from and that's where this story is at its most interesting.

He told Schiff, the Bidens and everyone else on Capitol Hill, "You can play your reindeer games but you cannot under any circumstance make me the fall guy for it."