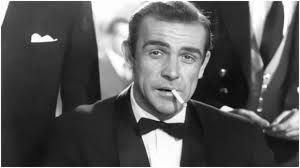 With roguish charm and sophistication, Connery inaugurated the long-running James Bond franchise with 1962's Dr. No and remained the prototypical "Bond" for decades, even - for many - until this very day.

Thomas Sean Connery was born in the Fountainbridge area of Edinburgh on Aug. 25 1930, the son of a Catholic factory worker and a Protestant housekeeper.

As the BBC reports in a lengthy biography published minutes after news of Connery's death broke, Connery "began life in an Edinburgh tenement and ended it with a villa in Greece, sharing a helicopter pad with the King of the Netherlands."

"Always hating the Hollywood lifestyle, he preferred to play golf at his homes in Spain, Portugal and the Caribbean, with his second wife, Micheline Roqubrune, an artist he had met in Morocco," the BBC said.

"He attributed his short fuse and his 'moodiness' to his Celtic genes. "My view is that to get anywhere in life you have to be anti-social,'' he once said. "Otherwise you'll end up being devoured."

But despite these quirks, Connery remains an icon of Scottish culture, and the definitive "Bond", even as Daniel Craig returns for another film, "No Time To Die", set to be released next year.