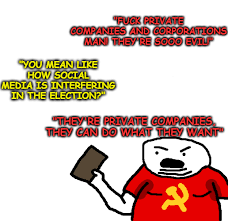 To obtain a realistic assessment of our predicament, however, we must be careful not to overstate the long-term significance of BLM. BLM is not the ultimate cause of our crisis. The groundwork for it had been laid long before BLM came into existence. It had been prepared in decades prior by leftists who kept systematically undermining the foundations of our society under the auspices of the Marx-inspired philosophies and ideologies we listed in this piece.

BLM is neither the mastermind nor the originator of America's plight. BLM is merely the militant wing of America's Marxist movement, which is the primal originator of the present strife. Violent groups such as BLM and Antifa emerge into prominence when problems and contradictions in a society reach a critical point and the overthrow of the existing system becomes a realistic possibility. It is at this stage that the militants come to the fore and try to foment the maximum disarray possible. If they succeed in creating enough havoc, Marxist politicians who have infiltrated the government attempt a coup. If the system is sufficiently discomposed, the coup has a good chance of succeeding.

Although BLM is now spearheading the advancing revolution, its mission is only temporary. Should the revolution succeed, BLM's violent ways will no longer be needed. Once the Marxists seize power, there will be no more need for internal destabilization. When this comes to pass, order will be restored and BLM disbanded. Some of its more militant leaders will be cancelled (by the firing squad) and some of those who survive will be absorbed into the new ruling structures. The foot soldiers – the looters, the hooligans, the gross woke – will be sent home and told to become good socialist citizens. They will be put under discipline of hard work in order to contribute to the well-being of their new society. Their factory shifts will begin at 8:00 AM and run until 6:00 PM. They will be required to dress and behave decently, just like their counterparts in North Korea. There will be no welfare payments, pornography, drugs or rap music for them. Insolence, shouting and protesting of any kind shall not be tolerated under any circumstances. Those who refuse to submit to the new socialist rules will be quickly dealt with by the internal police. Once in their hands, the former looters and misfits will tearfully recall the old times when they were coddled by good old American cops in whose tender care they enjoyed all kinds of rights. No such privileges under the new American Stasi regime! If there is a silver lining, America's Marxist revolution will put an end to sixty years of the Left's systematic destruction of the black family by misguided welfare programs. The destruction was, of course, by design because it was needed at that stage to further the Marxist agenda of subversion of American society.

Tesla Now Has More Than 1.25 Million Pre-Orders For The Cybertruck