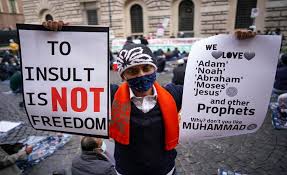 But it was with an odd mixture of pity and frustration that I read about a French schoolteacher, Samuel Paty, who was beheaded by a violent Muslim religious zealot for teaching his classes about the famous caricatures of the prophet Muhammed published by Charlie Hebdo magazine, the French equivalent of National Lampoon a few years ago.

The same kind of mindless animals had murdered twelve innocent people at the satirical weekly and wounded eleven others for no better reason than that they believed they had some kind of divine right to limit the freedom of other human beings. Iran's President Hassan Rouhani has recently warned Westerners that freedom of speech "ends on contact with Islam" (Minnesotans take note), and that it is no defense against insulting Islam. We must all submit and obey.

I was a bit surprised, the other day, when France's Whimperer-In-Chief, the Continental answer to Justin Trudeau, Emmanuel Macron, basically told Rouhani to go finger himself. I greatly enjoyed reading what he had to say. In the end, however, it was talk, all talk, and nothing but talk, and unless Macron straps on a piece himself, somebody else—some young soldier or policeman or cartoonist—will end up paying for his "courage".

By contrast, around the same time as the magazine massacre, two brutish thugs of the same type who brought AK-47s with them to assert their control over freedom of thought and freedom of expression in Texas—of all places—were blasted into the next dimension by one guy with a big iron on his hip. He was an off-duty cop, as I recall, but he could have been virtually any Texan. They don't say, "Don't mess with Texas" for nothing.

The conspicuous difference in the two cases, of course, is that most Americans are relatively free to exercise the absolute natural right of every individual ever born to own and carry weapons. The identical natural right of the French people has been savagely curtailed for decades by a long string of sketchy governments. There once was a time—I remember it well—when France designed and manufactured some of the spiffiest weapons of personal defense in the whole wide world. I owned a rotary-locking, high-capacity MAB PA-15—a very pistol advanced for its day—that I was extremely fond of and to this moment deeply regret having traded off. They also made a couple of extraordinarily interesting .32 "magnum" automatics which would market well today.