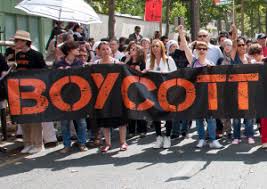 The term "boycott" was coined in 1880 by the Irish Home Rule leader Charles Stewart Parnell to describe a campaign of social and economic ostracism that was being waged by the Irish against the land agent Captain Charles Cunningham Boycott; he worked for an English absentee landlord who had wrongfully, albeit legally, evicted former landowners. Captain Boycott was despised, but the tactic was aimed more broadly at all usurpation of land. It went beyond the punishment of one man. Boycotts attempted to non-violently change the institution of property ownership by making the current system unworkable and in the hope that legal privileges for the English and the legal oppression of the Irish would be abolished.

Parnell once asked an Irish crowd, "What do you do with a tenant who bids for a farm from which his neighbour has been evicted?" The audience shouted, "kill him," "shoot him." Parnell's response? "I wish to point out to you a very much better way — a  more Christian and charitable way, which will give the lost man an opportunity of repenting. When a man takes a farm from which another has been evicted, you must shun him on the roadside when you meet him — you must shun him in the streets of the town — you must shun him in the shop — you must shun him on the fair green and in the market place, and even in the place of worship, by leaving him alone, by putting him in moral Coventry, by isolating him from the rest of the country, as if he were the leper of old — you must show him your detestation of the crime he committed."