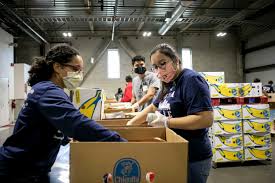 Bill Blackmer lost his job in telecommunications on April 18. Blackmer lives with his wife, Mary, and two young daughters in Weymouth, Mass.

"I waited until after dinner, once everything had settled down, to tell her," he remembers. "Mary didn't say anything, just grabbed her stomach and took three steps back and sat down."

He is among tens of millions of Americans who have turned to a local food bank for help after becoming newly food insecure because of the pandemic and its fallout. About 10 percent of American adults, 22.3 million, reported they sometimes or often didn't have enough to eat within the past week, according to the U.S. Census Bureau's most recent Household Pulse Survey fielded between Aug. 19 and 31. That is up from 18 million before March 13.

Feeding America, a nationwide network of more than 200 food banks, projects a 6 billion to 8 billion meal shortfall in the next 12 months, a deficit that may be magnified with federal food assistance programs set to expire in the coming weeks and months. The Feeding America analysis estimates the total need for charitable food over the next year will reach 17 billion pounds, more than three times last year's distribution.

At 41, Blackmer says he's been through quite a bit. His wife has a disability and he has been the primary breadwinner for a number of years. He has suffered from anxiety and depression for some time, once taking unpaid leave for a hospitalization. Since losing his job, he has liquidated his 401(k), used his $1,200 stimulus check to pay down some bills, and opted into a special payment plan with his mortgage lender. But even with the extra $600 per week in unemployment the Cares Act provided, things have been tight.