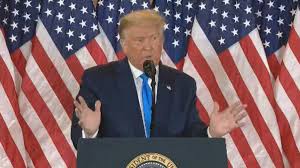 AP notes Biden holds a small lead over Trump of around 28,800 votes at 0930 ET Saturday, out of more than 6.5 million counted, a margin of about .43%, which is less than .5%, and under state law, this would indicate a mandatory recount must be held.

Pennsylvania is one of the battleground states Trump and Biden are neck and neck in as each seeks to reach 270 electoral votes to win.

Days ago, Trump prematurely declared victory in the state, saying:

"We're winning Pennsylvania by a tremendous amount. We're up 690,000 votes in Pennsylvania. These aren't even close. It's not like, 'Oh, it's close."

On Friday, the Pennsylvania secretary of state's website said tens of thousands of mail-in votes still needed to be counted, many from Democratic stronghold areas such as Pittsburgh and Philadelphia.

And this morning President Trump made it clear how he feels...