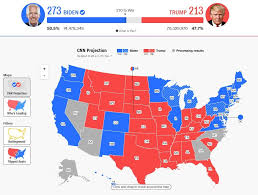 The mainstream media has launched a coordinated effort to proclaim Joe Biden President-Elect.

President Trump and his campaign team have reminded Americans that "legal votes decide who is president, not the news media."

As Constitutional lawyer, Jenna Ellis explains: "Joe Biden is not the president-elect just because media declares him so."

Media coordinated efforts are attempting to simply declare Joe Biden the president and ignore the rule of law.

There is no official winner until every legal vote is counted accurately, the states certify results, and all legal challenges are resolved.

As a reminder, here are the official dates that matter (as opposed to what CNN et al. think).

December 8: States are expected to resolve controversies at least six days before the meeting of electors.

December 14: Electors meet in respective states to certify their votes for President and Vice President.

As Trump said earlier, "this election is far from over."