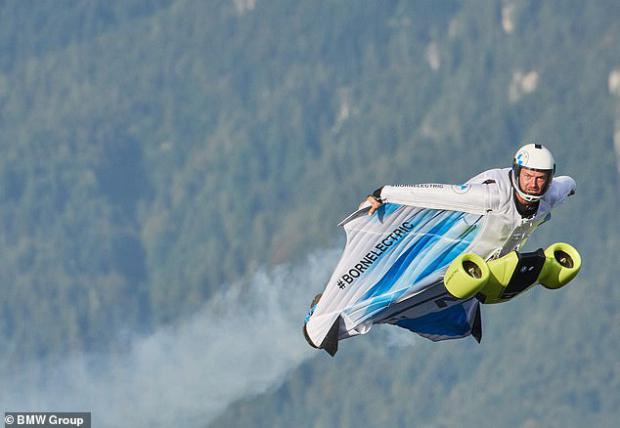 BMW is taking passengers to new heights with the first electric driving system for a wingsuit that hits speeds of 186 miles per - traditional suits only reach 62 miles per hour.

The design is the brain child of professional skydiver Peter Salzmann, who worked with the German carmaker to bring the vision from a drawing to the first flight test.

A chest mount is strapped to the suit that houses two carbon propellers that deliver a power of 7.5 kW, a speed of around 25,000 rpm and a total output of 15 kW, which is available for five minutes.

For the maiden flight, Salzmann was brought 10,000 feet into the air over the Alps mountain range.

After the jump, the daredevil soared towards the direction of the mountain, hit a thruster on the suit and zoomed across the peak in steep flight.

The idea of an electric wingsuit came to Salzmann, who is from Austria, in 2017, which began as sketches that turned into digital models and then the first prototype.

'The very first one was made of cardboard – and I built it so that I could get a feel for the size of the fly unit, i.e. the impeller unit including the batteries and everything that goes with it,' explains Salzmann.

'Initially we were going to put the propulsion unit on the back. But after the initial drawings and discussions with aerodynamics experts, we decided to move the fly unit to the front.'

He then teamed up with BMW, which provided the necessary tools to create the suit and driving system.