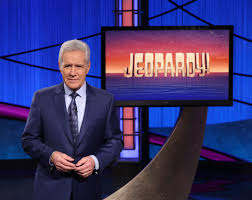 George Alexander Trebek was born July 22, 1940 and grew up in Sudbury, Ontario. His father immigrated from Ukraine; his mother was French Canadian

After working his way through college and graduating with a degree in philosophy, Trebek worked in radio and TV for 12 years in his native Canada

He made the move to Los Angeles in 1973 for The Wizard of Odds, and hosted many shows - High Rollers, Double Dare - before landing Jeopardy! in 1984

For 36 years, Trebek and the quiz show have been 'part of the fabric of American life.' Jeopardy! has won 35 Emmys and he has hosted nearly 8,000 episodes

He died on Sunday morning, surrounded by his family and friends

Trebek is survived by his wife of 30 years, Jean Currivan, and their two children, Matthew and Emily, and Nicky, his first wife Elaine Callei's daughter