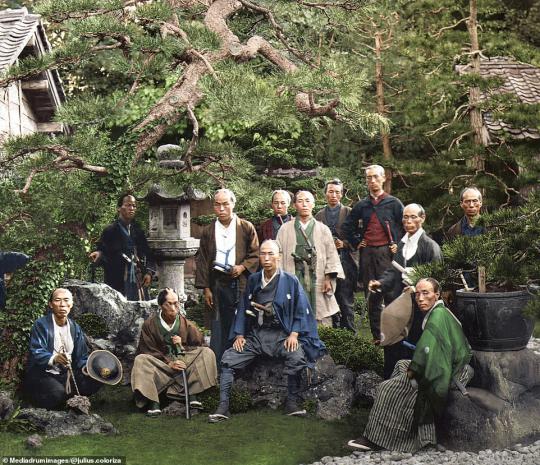 Samurai warriors are shown preparing for battle in a set of colourised images documenting life in the Far East over the past 200 years.

The fascinating pictures show fighters of the Satsuma clan gathering around a map during the 1868-1869 Boshin War, a civil war in Japan.

It broke out between the ruling Tokugawa shogunate nobles and an alliance of samurai clans looking to overthrow the military government and restore imperial rule.

But he then oversaw a period of rapid modernisation which gradually abolished the samurai and integrated them into the professional, military and business classes.

Samurai were the military nobility and officer caste which originated in Japan in the 13th century. They would carry two swords and adhered to the Bushido way of life, a form of chivalry which included loyalty, indifference to pain and taking part in battles.

Student Julius Backman Jääskeläinen, 21, from Visby, Sweden, developed an interest in colourisations in 2017 having always had a fascination with history.

Julius has since colourised over 1,000 images paying particular interest to the Far East and samurai culture.