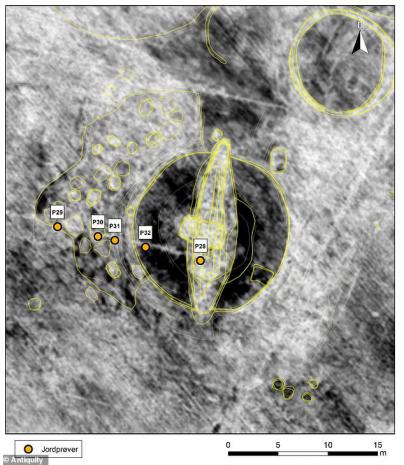 A Viking ship burial, feast hall and cult house have been found by archaeologists in Norway without having to dig into the soil - only using ground penetrating radar.

The discovery was made by experts from the Norwegian Institute for Cultural Heritage Research (NIKU) at Gjellestad in southeastern Norway.

Gjellestad is home to the Jell Mound, one of the largest Iron Age funerary mounds in Scandinavia and this new discovery adds to the prominence of the site, suggesting it was used for from as early as the 5th century AD through to about 1050 AD.

Radar scans revealed 13 burial mounds including one featuring ship grave, a simple farmhouse and buildings that may have been used during religious practice.

Viking experts say the ship burial would have been reserved for a powerful Viking individual and was to mark their 'safe passage into the afterlife'.

The radar data showed that the Viking ship was about 62ft long and was buried up to 4.6ft below the surface of the ground, according to the research team.

The latest surveys of the Jell Mound site first began in 2017 and they found 13 burial mounds once existed at the same with some over 100ft wide.

As well as the ship, researchers found a farmhouse within the radar scan data alongside a large building that would have been used for feasts and a religious structure such as a cult house not intended for habitation.

'The site seems to have belonged to the very top echelon of the Iron Age elite of the area, and would have been a focal point for the exertion of political and social control of the region,' said Lars Gustavsen, lead author of the research.

The range of structures and burials at the site suggests it has a long history of use.

Whilst the Jell Mound could date to the 5th century AD, the ship burial appears to be part of a Viking tradition common several centuries later.