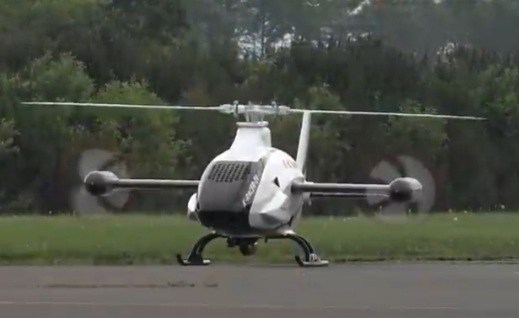 Only $3.2 billion of that came from the motorcycle and engine division – a further $2.5 billion came in from energy systems and plant engineering, and $2.2 billion from precision machines and robotics.

The largest segment of the Kawasaki empire, contributing $4.6 billion, is its aerospace systems division. Kawasaki makes a small range of military and civilian helicopters, as well as large turbofan engines for various Airbus and Boeing airliners.

So this new K-Racer design is well within the company's wheelhouse. The K-Racer is an unmanned compound helicopter – compound referring to the fact that it uses multiple propulsion systems. Its 4-m (13.1-ft) top rotor looks much like the one on any large helicopter, and it's clearly capable of modifying the angle of its blades as they rotate around the central shaft to give it omnidirectional tilt and movement capabilities.

It has no tail rotor, though, and instead two simple forward-facing props on the ends of its short wings handle the job of yaw control, as well as balancing out the torque from the main rotor so it doesn't go spinning off into the weeds.

Those rotors also generate thrust to move the K-Racer forward in horizontal flight, and Kawasaki says the design gives this thing the ability to fly substantially faster than a conventional helicopter design – much like the Ninja H2R motorcycle (from which the K-Racer's supercharged 300-horsepower engine is derived) can go substantially faster than a conventional bike.