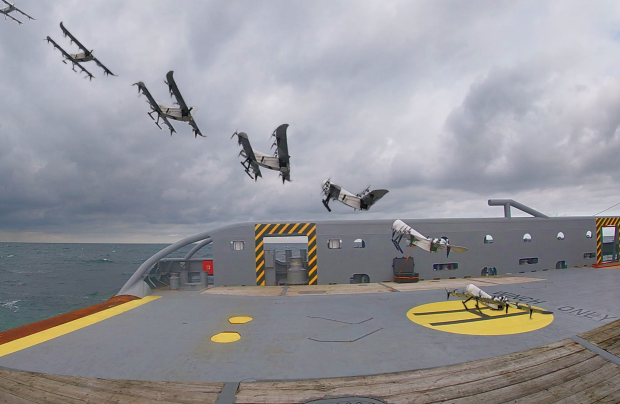 The experimental aircraft was developed by a team at the Netherlands' Delft University of Technology (TU Delft), working with colleagues from the Royal Netherlands Navy and the Netherlands Coastguard. It has a 3-meter (9.8 ft) wingspan, weighs 13 kg (29 lb), and features 12 motor/propeller units distributed on its two wings. Even if several of the motors fail, it can reportedly still fly and land successfully.

The drone is also a "tail-sitter"-type VTOL. This means that when taking off and landing, its body is angled upwards, allowing the propellers to work more like a helicopter's rotor blades. For going into forward flight, the thrust is electronically redistributed between the 12 motors, causing the aircraft to level out into a horizontal orientation.

It additionally incorporates an 800-watt fuel cell, which is fed by an onboard 300-bar (4,351-psi), 6.8-liter carbon composite hydrogen cylinder. In forward flight, the motors are powered solely by that fuel cell, which also charges an onboard battery pack. For take-offs and landings – which require considerably more power than cruising – both the fuel cell and the battery power the motors.

In a recent trial conducted off the Dutch coast, the drone took off from the deck of a coastguard ship, then proceeded to fly over the open ocean for 3.5 hours before landing back on the vessel. It is hoped that the aircraft could ultimately find use in applications such as reconnaissance and inspection.