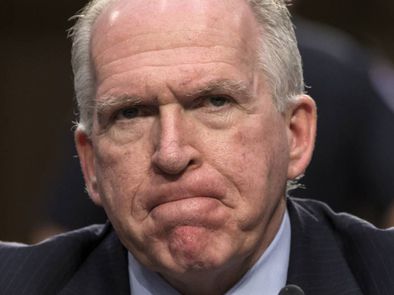 Former CIA Director John Brennan is apparently so worried that Donald Trump might release certain classified intelligence that he suggested this week that Vice President Mike Pence and the cabinet remove Trump via the 25th amendment.

Brennan appeared this week on both CNN and MSNBC to spread alarm about what Trump might do as he continues to contest the election results and appoints new people at Defense, NSA (and possibly CIA) who may do his bidding.

Brennan warned on CNN that it was "very, very worrisome" that Trump "is just very unpredictable now … like a cornered cat – tiger. And he's going to lash out."

Brennan told MSNBC he was worried that Trump has called for the "wholesale declassification of intelligence in order to further his own political interests."

Whom would he lash out at and what classified documents might Brennan be referring to?

The CIA's point man at The Washington Post, David Ignatius, has provided the answer:

"President Trump's senior military and intelligence officials have been warning him strongly against declassifying information about Russia that his advisers say would compromise sensitive collection methods and anger key allies..."